Solar Panel Installation Update
I have completed the installation and opted to go with 4, 100 watt panels not the 2 I had originally planned on installing.   You may want to skip the next subparagraphJ
They each have the potential to supply 100 watts per hour but that is not practical to get that the panels would have to track the sun as it moved during the day.  I do get that at times during the day and then how many hours of sunlight will I get…4 hours of sunshine a day and 75 watts per panel (per hour) is the average I am using for my calculations.  In the end I am getting around 300 watts per day per panel or 1200 watts total (potential 100 amp hours into the battery bank).

Along with the 400 watts of panels I opted to go with 4 6 volt golf cart batteries.  With the larger battery bank I could now install an inverter in lieu of waiting.  The inverter will supply 120 Volts to all the outlets in the RV, this will allow me to operate everything in the RV as if plugged into shore power except the Air Conditioner.  If I need air conditioning I will need to plug into shore power.  Just too many batteries and solar panels needed to run an AC…at least in an RV.
The original plan of smaller battery bank just did not give me enough reserve for a rainy day or two.   Based on rough calculation I have battery capacity of 2-3 days without having to recharge.  But that would mean I would have to be in a thunderstorm that was nonstop for 2-3 days.  With light cloud cover I still will get some charge into the battery bank.
During the day with partly cloudy skies I am able to watch TV for several hours, run a fan along with lighting and recharge the battery bank.  After sundown I can watch a couple hours of TV at night with the ceiling fan and lights, get up and watch morning news on TV and charge my computer.  This activity will consume approximately 7-8% of the battery bank charge.
The inverter is setup on an automatic transfer switch (ATS).  When the inverter is turned on the ATS switches and the RV is supplied electricity from the inverter when the inverter is turned off the ATS switches back to the shore power.

I have some other operations in the RV that will require a lot of watts to operate, slides outs, and hydraulic leveling system.  They will consume approximately 700 watts to operate.  The length of time will be relatively short but a major power draw for a short period.  This is one of the reasons for over sizing the battery bank to ensure I can move the slides in and out and run the hydraulic leveling system.
I also have one other power hungry item…my coffee maker.  It draws about 1200 watts to operate and that can drain a battery bank in a hurry.  I have used it on the inverter and it all works great, and I was able to recharge the battery bank from this heavy usage (approx. additional 5% battery use for one morning’s coffee).  But if I used the coffee maker and have a cloudy day it would be a challenge to completely recharge the battery bank.  So my coffee maker will be used only on days that have no rain in the forecast.  So on those rainy days it will be hand grind my coffee beans and the old faithful French Press.


I can be completely off the grid except when AC in needed. 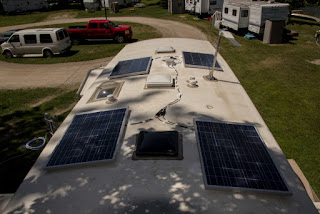 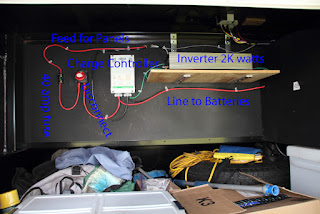 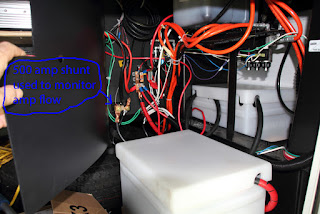 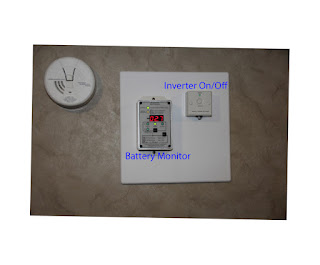