I am hosting at Williams Bottom BLM Campground on Scenic Hwy 279 approximately 10 miles from downtown Moab.  About a quarter of a mile from the campground is a popular climbing area they call “Wall Street”.  You can see from the pictures the walls are right on the street just enough room to park your vehicle and start climbing.  The walls are several hundred feet tall (I was told 400 feet tall) with most of the climbs 50-60 feet.

To go with the climbing Moab has world class mountain bike trails and 4X4 trails all through the canyon of the area.  The area has some beautiful scenery with hiking trails, scenic highway drives and a good network of paved walking and bike trails.  The hiking trails are as short as 100 yards to several miles with plenty of information on each trail to help you decide which ones to take and which to pass on. 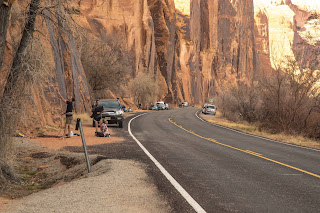 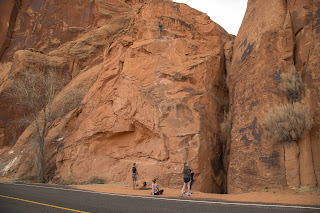 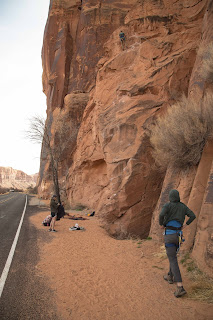 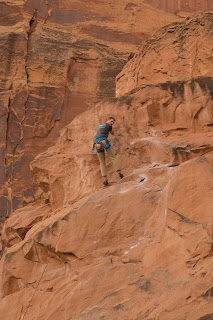 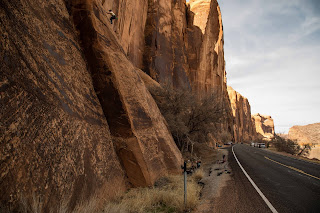 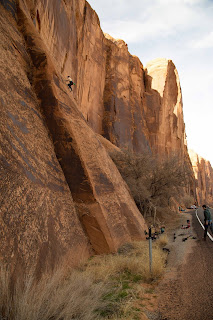 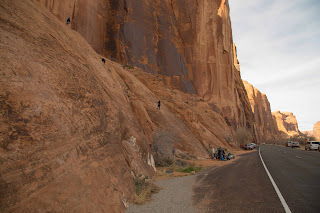 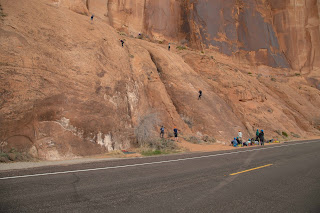 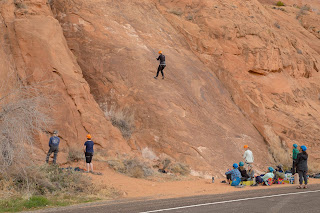 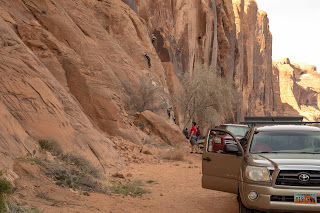 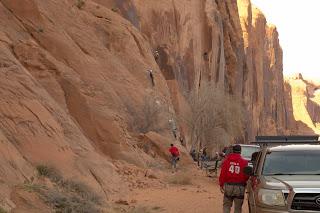 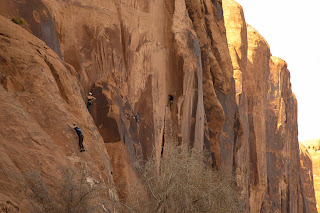 The intro is a bit long but there are pictures of the general area around Moab below:-)

My Camp Hosting started early this year with a last minute offer to host a BLM (Bureau of Land Management) Campground in Moab Utah.  Arriving in the high desert in February was somewhat of gamble on the weather.  One of the biggest challenges was getting over the mountain passes that surround it from the south and east.  The computer model had me travelling across Kansas and Colorado this route looked interesting but it was mostly US Highways good routes but not interstate quality considering the possibility of winter weather.  I opted for I-40 to Gallup NM then north on US-491 to US-191 into Moab UT.  This route had the potential for some bad weather with snow and rain mix in the forecast.  I was able to adjust my time and I got into Moab without any winter weather road conditions.

Arriving in Moab on the 13th of February I may have beat the weather here but it was right behind me.  The first two weeks had an average low around 15-20 and highs 40ish with lots of clouds, wind, rain and a dusting of snow one day.

The BLM campgrounds in the Moab area have no electrical or water connections for the host.  With my solar package I felt comfortable volunteering through the end of April.  With my prior commitment to return to North Idaho early May this worked out good for me.  I was assigned

Williams Bottom Campground starting March 1st and was asked to work the Goose Island Campground until the first of March.  The position of camp site and sun this time of the year was not ideal and there was a large cottonwood tree impacting morning sun, there were no leaves but enough limbs to effect the solar panels.

There were several campers in the campground that had solar packages some portable and some mounted on the camper.  It was educational comparing information with the other campers using solar panels.  What I saw was most of the campers were using a portable 200 watt package with two 12 volt batteries.  The 200 watt system when properly positioned and limited battery draw to minimum needs and keeping the furnace set to 55ish the batteries would recharge during the day.  My 600 watt system would not always completely recharge my four 6 volt batteries but the batteries never went below 75% during the cold overcast days.  On the cloudy days the 200 watt system needed assistance to recharge the batteries to the level needed for another cold night.  The few campers I have had in Williams Bottom campground to date are a younger group mostly climbers.  Williams Bottom may have a different group of campers but they pretty much have the same appreciation for getting out and enjoying this great country we live in as the older group of campers I see in other campgrounds.

I relocated to Williams Bottom 26 February.  When at Goose Island I had spotty phone reception not a problem at Williams Bottom there is NO reception…problem of dropped called solved.  Williams Bottom from a solar system aspect goes is the optimal location.  The camper is parallel to the Colorado River on the east with cliffs on the west with a north south placement of the camper giving me best possible alignment with no trees to affect the panels.  I start receiving a charge at 8:00 AM and continue until the cliffs block full sun around 3:00PM.  I am fully charged on sunny days before noon.

Williams Bottom is setup for campers under 24 foot long.  The host site will accommodate up to about a 38 foot camper and has a vault for dumping black and grey tanks.  The BLM office has loaned me a 50 gallon portable potable water tank that I can replenish at the BLM office in Moab.  With the portable water tank, on site dump and plenty of sunshine this time of the year being off grid is not so bad. 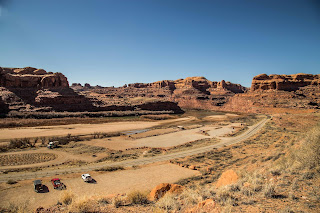 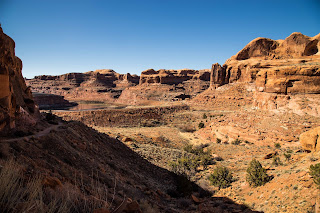 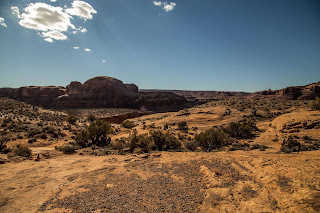 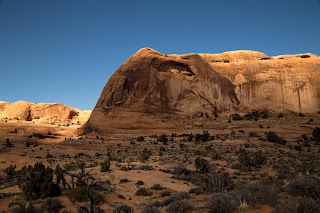 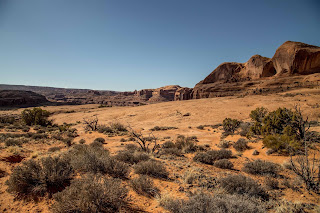 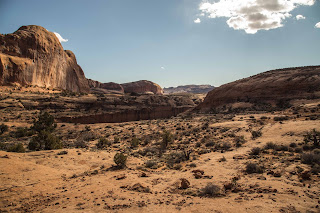 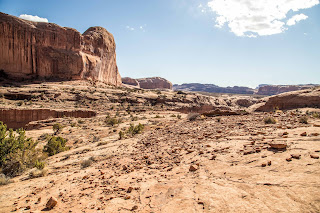 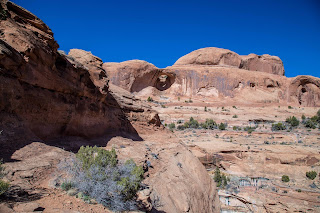 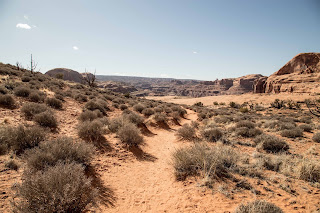 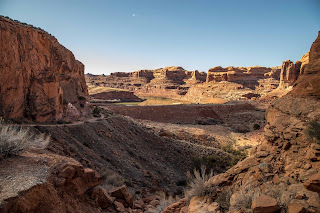 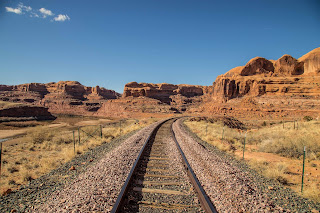 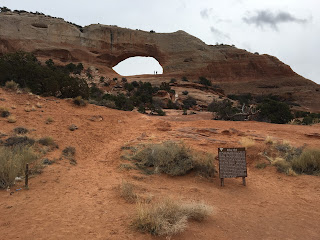 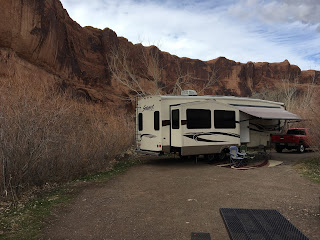 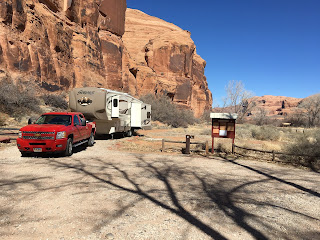