Denali Highway with Lisa and Carolyn

Lots of cloud cover that limited some of the views...but it was a great road to drive.

8/15/16 Monday   Denali RV Park- Brushkana BLM campground on Denali Hwy  52 partly cloudy  high mid-upper 60’s
I was told that the Denali Hwy was in bad shape but they have been working on in.  The first 30 mile to Brushkana campground has been in good condition.  The scenery was outstanding, views of snowcapped mountains and mountain streams all along the ride from Cantwell to Brushkana Creek.  We caught a moose in the middle of a small lake feeding on the vegetation grown on the bottom of the lake.  The water was up to the top of the moose’s shoulders.
Had a camper know at the door as we were getting ready for dinner looking for a tire plug kit.  I was able to locate a plug kit that I purchased for this trip and loaned it to him.  I was not sure who would need it but I knew someone would and now I have found him.  After successfully repairing his tire he returned the kit as a happy camper.
Brushkana creek is listed as a good Arctic Grayling creek.  There were several people fishing right at the campground when I wondered down to the creek.  One was fly fishing and 2 were using spinners.  No one was catching anything.  The one flying fishing was using a nymph I asked if he had tried a fly he told me he only had the one lure with him.  In looking around I found a trail that followed the creek up stream.  So I when back to camp and suited up with all my gear.  The creek was a bit fast and deep for wading for the most part but I when with the waders just in case the river offered some wading opportunities.   I hiked downstream about ½ mile stopping at potential spots that may have a grayling or two looking for dinner.  I never found a good wading area but I did locate a couple of good spots and caught 4 nice grayling in the 12-14” size.  Took them back to camp and cleaned them for dinner.  We opted to fry them, so dinner was fried grayling, french fries, cole slaw, and hush puppies with a good white wine and conversation. 16 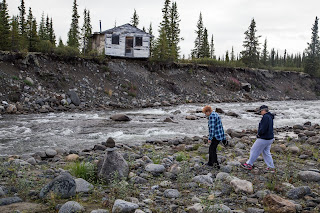 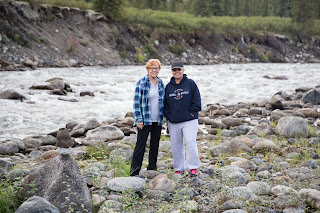 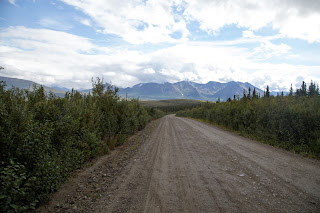 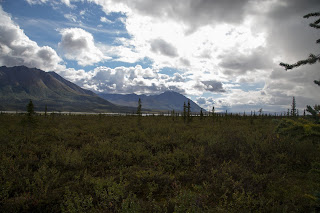 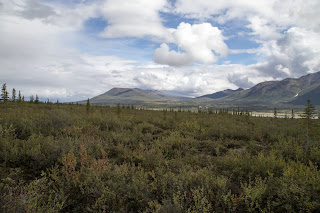 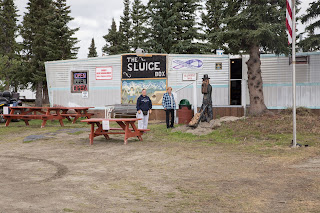 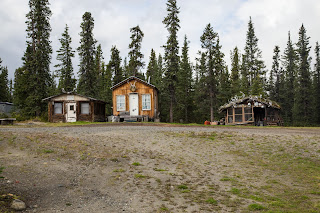 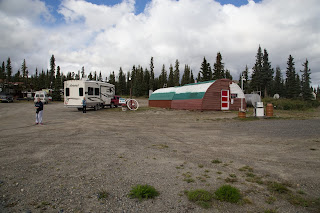 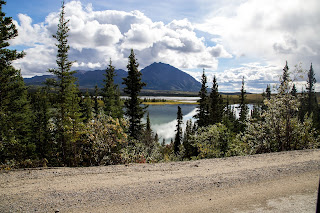 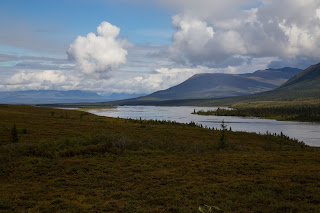 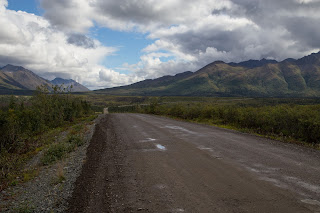 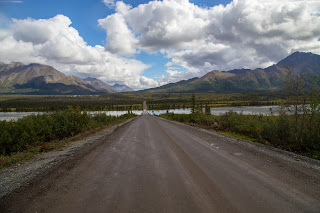 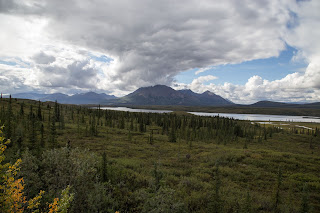 8/16/16 Tuesday Denali Hwy Sarah Lake MM 63  Upper 40’s       55ish partly cloudy
Got up at 1AM this morning checking on the Northern Lights…I found the sky overcast with rain.  So back to bed and we will try again tomorrow morning.
Continued down the Denali Hwy today got up and a light breakfast took a few photos and left camp around 10AM.  We drove to mm 63 and setup at Sarah Lake for the evening.  Lot of great scenery along the way.  Stopped and picked some fresh blueberries, they are every were this time of the year.  The truck is getting back to a DIRTY truck and camper it is not clean any longer, rain and gravel roads tend to do that.  We had light rain all morning off and on.
The fuel stop at MM 80 a B&B had diesel but the pumps made me question the quality of the fuel so I opted to not fuel up just wait until I got to Paxton.  We are averaging 6-7 MPG on this leg of the drive.
We had an eagle that was making passes over the mountains near the camp site.  We had noticed that several campers slowed down as they approached the site as if they had wanted to stay where we were.   There is a single lane drive that leads into a small area next to Sarah Lake and there is not room for more than one RV s so we were hoping they would move on down and not try to squeeze in another RV here.   We had walked down to a bluff about 100 yards from the camper trying get a picture of the elusive eagle when we heard voices.  First thought was we have other campers setup close to us…and that would okay as long as they were not impeding out movements.  As we walked back     on the road we saw that the talking was from a couple of people on bicycles that had stopped at our campsite.  We go back to the site and a third cycler had arrived.  They were looking for a place to camp preferably near water and want to camp by the lake next to us.  The cyclist were three young women from the Fairbanks area that were cycling the Denali Hwy.  In talking with them they all had toured some parts of the Denali Park road but admitted there is just too much traffic in the Park for riding.  They had ridden 42 miles today and planned on 45 but the little lake was just too pretty for them to pass.
Never did get a good picture of the eagle/s couple of distance shots but it was still a bonus to get to see one flying around the area. 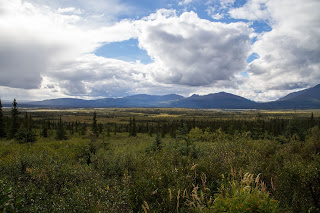 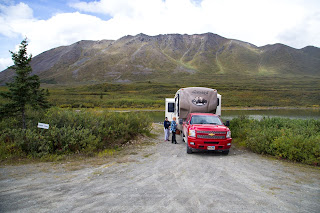 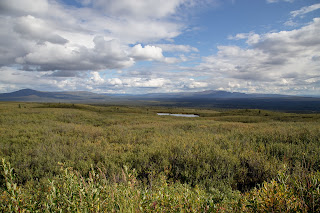 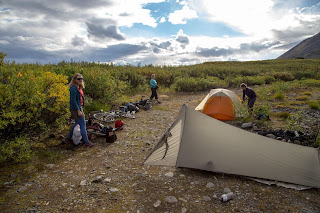 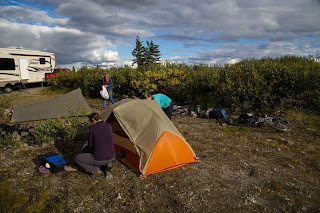 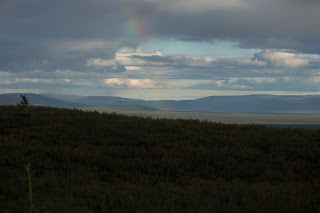 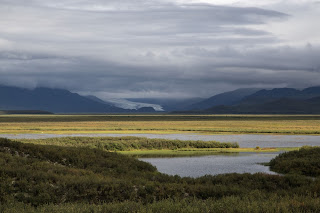 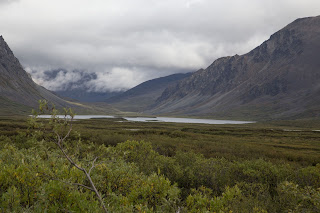 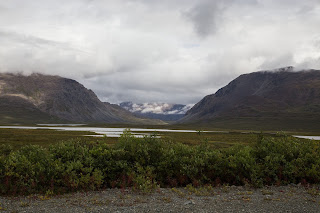 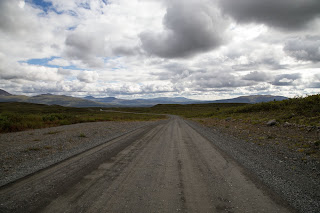 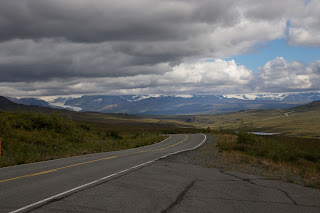 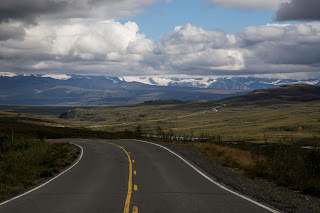 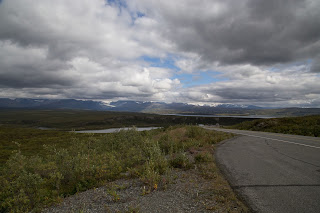 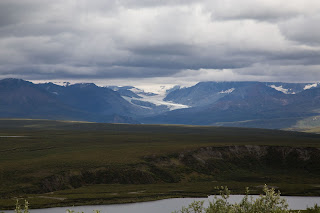 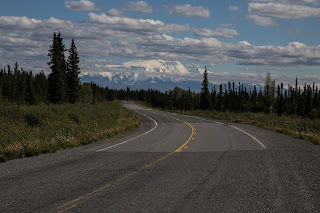 8/17/16 Wednesday   Glen Hwy MM 176                   Lower 50’s overcast light rain  66 partly cloudy
Up this morning at 1AM and 2:30AM checking the shy for any sign of the Northern Lights.  The sky was partly cloudy with the moon still up at 1AM and at 2:30AM the moon was down but even more clouds so no Northern Lights this morning…maybe tonight.
Lot of beautiful scenery yesterday and got lots of good pictures.
Drove on through the Denali Highway to Paxton.  There is nothing in Paxton from what I saw other than fishing areas and a few B&B’s.  Spend the night on the Glen Highway with an outstanding view of the Wrangell Mountain’s.  Lots of pot holes but it was worth the slow drive to see all the great scenery that is along the Denali hwy.
Looked like either hunting season has started or a lot of scouting going on along the Denali Highway.  Four wheels with gun racks and people using spotting scopes.  But no sign of any caribou or moose being harvested.