Lisa and Carolynn arrived yesterday as scheduled at 2PM.  We picked up a few groceries (actually filled my frig) and a couple more bottles of wine.  We then packed up everything and headed for Denali RV Park on the Parks Highway.  We arrived at the park at 7ish they had one site available that we could fit into.  I knew it was going to be a fun site when one of the clerks commented “Yes J1 the one back on the hill”.  They walked back with me to see how I want to approach the site to back in.  It was a tight spot and when I started backing in 3 of the other campers came out and watched me back in as if they have seen others try and fail.  With a little luck I was able to back in with one try as much luck as skill but they will never know.  Once setup we road up to Denali National Park to check on shuttle tickets for Sunday, and lucky again they had tickets available.  After purchasing tickets we road into the park about 12 miles hoping to see some wildlife but all we saw was road work just about all of the first twelve miles was under construction.  It was too cloudy to see Denali and too much road traffic for wildlife….We made it back to camp about 10PM and my two friends appeared to still be on EST and would not even have a glass of wine it was straight to bed.  The day started for them with a 7AM Atlanta flight to Fairbanks that would make the 10PM to me their 2AM so it was time for so rest.
Up early for breakfast and coffee.  We have a 9:30 AM shuttle bus in Denali National Park.


Denali was a great day trip.  We found out that only 30% of the visitors get to see Denali.  This is due to clouds.  Denali is 20310 feet high and located 75 miles from the Denali Park Rd.  We were one of the lucky ones we are now in the 30% club yes we saw Denali and got some pictures.  We saw well of 12 caribou, so many at the end of the tour we passed on a caribou for a ptarmigan and her babies.  Saw one large grizzly, arctic ground squirrels, and black bill magpie.  Lots of breath taking views of the mountains and rivers inside the park. 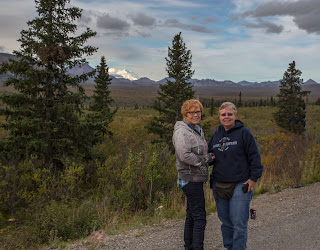 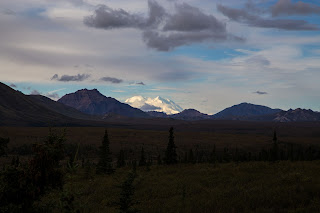 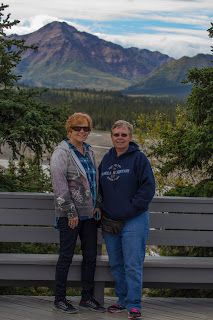 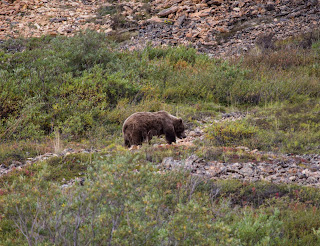 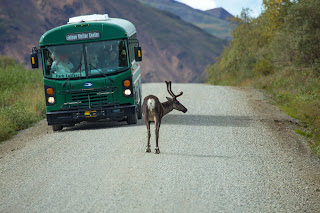 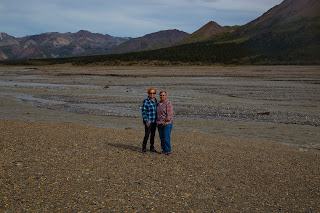 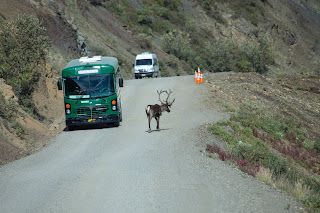 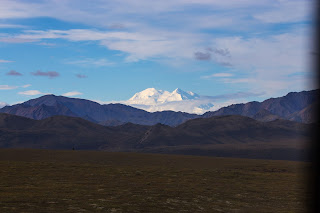 Denali at 20310 feet elevation and 75 miles away...the closer mountains are about halfway between this location and Denali.